I have grown rhubarb in my garden in the past but I didn’t really know what to make with it the first year I grew it and decided to not grow anymore since. Now that I have this recipe, I might just have to give growing rhubarb another go!

One important thing to note, if you are new to cooking with rhubarb – the leaves of rhubarb can be toxic. So, you should never, ever, NEVER eat rhubarb leaves. The good news? The stalks are perfectly safe to eat, and that is what you will usually find in the grocery stores in the produce aisle.

Rhubarb stalks are pretty tart/bitter in flavor, so that is why when you do see recipes using rhubarb, sugar is a pretty popular ingredient!

This rhubarb pudding was found written on a folded index card in black ball point pen ink. It comes from our Vintage Metal Floral Recipe Box, which we believe was first created and actively maintained through the 1980’s.

Here is the Recipe Card:

The front of the card contains the ingredients: rhubarb, sugar, oleo, sugar, egg, flour, milk and B.P. – which is an abbreviation for baking powder.

This “pudding” is more of a cake/cobbler/bread pudding than, say a custard pudding – but it’s still a good option to consider making if you have rhubarb or like rhubarb!

The back of the recipe card is pretty straightforward.

I’ve adapted the instructions a little bit to make them clearer – it can definitely be confusing sometimes when you find an old recipe and things are written in shorthand or sometimes steps are left out entirely. {Like the recipe card from my grandma’s Polish Cream Cheese cookies!} 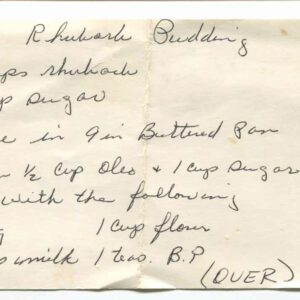 I hope you enjoy this recipe and if you make it I would love to hear your thoughts and experiences in the comments section below!

We love all things vintage and antique! We believe in salvaging discarded, broken, and forgotten items to be used in new and creative ways.

Learn More About Us